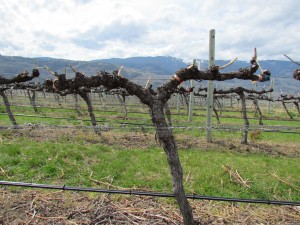 In 2010 I followed ONE Chardonnay vine in front of my home for the entire growing season (April until harvest in Fall).  I called it #ChardyTuesday because once a week on Tuesday I would tweet the progress I had seen in both the vine’s growth and the clusters.  It was a great way to document the growing season, week by week, from one vine’s perspective.

In 2011 I choose a Syrah vine, also near my  house, to documents in the same manner.  I called it #SyrahTuesday because I am so very creative.

This year a group of ladies came out in August for a weekend of tasting Cabernet Francs and helped me choose the vine I would follow in 2012.  #CabFrancTuesday was born.  Our  little vine, whose trunk leans to the south, is planted on our Diamondback Vineyard on the eastern Black Sage Bench.   Block 2, row 45, vine 5 was planted in 1995. The vines all run North–South, allowing for great air flow and sun exposure on both sides of the canopy.  The soil is sand as far as you can dig and this helps to keep a normally vigorously growing variety like Cabernet Franc in check. 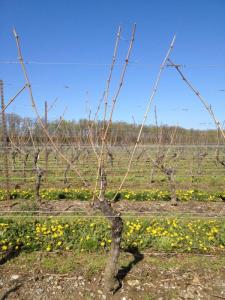 I was approached by Brian Schmidt (@BenchWineGuy on twitter) from Vineland Estates Winery in Ontario.  Vineland Estates grows one of the best Cabernet Francs in Canada.  A serious wine.  And I’m not just saying that because he’s a great guy on twitter either.  He wondered if he could “sidecar” the #CabFrancTuesday adventure this year by chronicling an eastern vine from Niagara and our western vine from Oliver.  He has chosen vine 14, row 10 from Bo-Teek Vineyard which comes from a pretty nice pedigree…the vineyard used to be and Equestrian Training Centre for, among other horses, Northern Dancer. 8 acres of Cab Franc (clone 327 on SO4 rootstock) were  planted in 1998 after Vineland Estates took over the property.  It is slightly north facing toward Lake Ontario with clay limestone substrate soil.

So we will be chronicling the growing season in both BC and Ontario through the “eyes” (leafs? buds? berries?) of two Cabernet Franc vines grown 3,144 kms away from one another.

You can find out a bit more about me through the "About Me" page at the top of my blog.
View all posts by Sandra Oldfield →
This entry was posted in Canada, Grapes and Wine, TInhorn Creek and tagged 2012, cabernet, cabernet franc, CabFrancTuesday, clusters, franc, Grapes, niagara, niagara-on-the-lake, okanagan, Tinhorn, Tinhorn Creek, vine, vineland, vines, vintage. Bookmark the permalink.

2 Responses to #CabFrancTuesday #West and #East